In 1995, my first child was born in Brighton, England. I felt fabulous for the first 5-6 weeks
after her birth, and then my health took a dive and my life changed significantly. 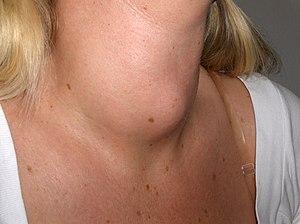 I discovered a large lump growing in my throat – my initial fear was that I might have cancer. A fine needle aspiration and an isotope scan provided a diagnosis of autoimmune thyroiditis and a benign goitre.

My thyroid gland was all but destroyed by an auto-immune response which required me to
take supplemental thyroid hormone replacement for the remainder of my life, as my thyroid gland would not be able to produce it any longer. I began to take levothyroxine to replace the lost hormone production.

I refused to believe that my body could not regenerate or heal itself. Over the following years I experimented and stopped taking my prescription intermittently, continually testing my body’s ability to heal itself. Unfortunately the symptoms of hypothyroidism increased over the years:

1998 I fell pregnant, but had a miscarriage very early.

2000 I was referred to an endocrinologist for my 3rd pregnancy.

2000+ After the birth of my son my symptoms worsened over time and my levothyroxine dosage increased from 100mcg to 150mcg.

2006 New GP tried to stop my medication completely. I was referred to an endocrinologist to oversee the process. Symptoms much worse without hormone replacement.
Woltman’s sign – the Achilles Tendon Reflex obviously hypothyroid.

2009 WHO Swine Flu Epidemic: import of Armour stopped and returned to only levothyroxine supplementation. Symptoms much worsened.

2010 liothyronine (T3) and levothyroxine prescribed. Symptoms much better, but not completely gone.

2011 Visit to USA to sing and perform in a musical theatre with my son for my faith/church saw my weight reduce over the two months there. Before coming home I was unable to swallow without huge amount of discomfort and pressure on my oesophagus – surgeons consultation in USA showed multiple nodules – mainly to the right side. Advised to have surgery.

2013 Discovered META Health and Root Causes of my symptoms and hypothyroidism. Started work to clear the underlying traumas and UDIN’s and discover the patterns. Within 6 months my remaining symptoms (whilst taking prescribed hormone replacements) were gone. I took myself off of my medication and No symptoms returned. For the following 6 months I continued to have blood tests at GP every 3 months and after 2nd ‘within normal range’ result I told my doctor that I had stopped taking supplements 6 months earlier.

2014 Endocrinologist confirmed I was no longer hypothyroid:

“In summary, this lady is clearly euthyroid despite no thyroxine supplements and the only explanations I can give are that she may have compensated with growth of the thyroid for the previous hyperthyroidism and her thyroid supplements will clearly have suppressed her TSH previously…”
Michele Lucarotti, Consultant General Surgeon

Associated with “not being able to process information which is essential for survival”.

The first experience of using META health to assist my discovery of the core themes and how they related to the thyroid program was by following my personal time line back to when I was
diagnosed with hypothyroidism in 1995. By tapping whilst concentrating on the theme, and asking when did my survival feel threatened just before the symptoms began? I remembered a time just after my daughter was born and my husband and I had just moved (a couple of months earlier) to live together in a 1 bedroom flat. We were only just adjusting to life as new parents and living together for the first time.

My sister asked if she could stay with us whilst she did training for 12 weeks. My husband was not happy for her to move in, when we were only just adjusting to life with our new baby and each other ourselves. We said she could come and stay but only one night a week. This news was a significant change in dynamics for my parents, as I had always allowed everyone to do whatever they needed or wanted previously. I do not believe I had ever said “no” in any way. As a result of this my parents and my then partner, now husband, had a huge row on the telephone. The ensuing anger, aggression and threats of violence that followed during that telephone call was the UDIN that triggered the thyroid program.

Hearing the argument unfold (VAKOG = auditory) I literally went into freeze as I realised that I could do nothing to stop the unfolding situation. I could not work out how to resolve everyone’s concerns, emotions and thoughts. I was unable to process the whole situation, to work out a ‘solution’ to the problem that would make both parties happy. The resulting dynamics of fear and anger remained between my parents and my husband for most of the following 20 years. At a deep level, I perceived this threat to the peaceful dynamics of my family as a threat to my survival. With further work I uncovered a belief that anger and fear were significant threats to my existence.

However, this cognitive awareness was not completely present when I did the work of ‘clearing’ the energy of the UDINs as they presented themselves. Understanding the connections was not necessary in the clearing of the energy that was embodied within the thyroid programs themselves! Even if my mind did not understand the connections fully, my body did! It responded appropriately to the perception of danger to my survival within the situation!

Specifically other peoples’ anger inducing fear within me. It had rendered mepowerless as a child and I also found myself working through many emerging ‘past life’ stories that had resulted in death or suicide as a result of such dynamics.

At the beginning of my hypothyroid dysfunction there were telephone calls and conversations almost daily where I would hear one or the other, parents or partner, complain about the other. This wouldhave continued to re-trigger the thyroid program (of course at this time, with the thyroid program incontinued stress phase, my own body initiated the auto-immune response to halt the thyroid program as a solution to the problem.

However, my additional thyroid excretory duct symptom’s of a benign goitre, sometimes
known as Euthyroid Stroma, indicate via the META health system that I was also going into the regeneration phase:

The continued growth of the goitre suggests that I became stuck in the hanging healing phase
of the program. I would have been regularly re-triggered into this sense of hopelessness and powerlessness.

There would have been many moments that I thought I had said something that resolved my sense of being unable to say something appropriate, only to find that it had not had the desired effect of resolving the anger or fear when the conversation and complaints re-occurred again the next day.

I worked through this UDIN moment using EFT and Matrix reImprinting. Following the theme and the emotion in the organ (thyroid), I found multiple UDINs from childhood and even into and before the womb that all resonated around these themes of:

Discovering the original UDIN that made the thyroid program first evident was the doorway
into the work.

Using tools such as:

I was able to work on the energetic and emotional imprints within the body and reintegrate more positive and affirming beliefs that reversed the biological programs and stopped any re-triggering of the old beliefs.

Once these beliefs were cleared, the old energetic connections and triggers no longer affected the organ/tissue function.
The result was the “growth of the thyroid” within my body and the resulting production of
natural thyroxine.

I am currently euthyroid and have taken no thyroxine supplementation since 2014.

Study the methodology of healing!

Deborah Wiggins-Hay is an intuitive artist and musician. A Meta Health Master Practitioner and Trainer as well as an EFT Master Practitioner and Trainer using multiple Energy Psychology tools (including colour & sound) to assist deep physical, emotional, psychological and spiritual healing and evolution.
She is the creator of Crystal Moon Essences and is committed to help others overcome trauma and disease, with a personal experience and specialism in Thyroid. She is currently studying to extend her practice by becoming a naturopathic nutritionist and writing several books.